AnneMarie Maes and Hantu in Portugal

AnneMarie Maes is taking part in the exhibition For a Brave New Brussels. Lab01 Artistic vs Technocentric approaches on Smart Cities which officially opens tonight at the MAAT Museum in Lisbon.

Featuring 9 installations and 2 in situ creations by artists who live and work in Brussels, the show is organised on the occasion of the visit of their Majesties the King and Queen of Belgium to Portugal.  The works on show each invite the spectator to think critically about the future role of artists in contemporary cities and the potential for a dialogue between the arts and industry.

The main theme of the projects on display is the concept of smart cities. Contemporary cities are magnets that attract growing numbers of people, resources, ideas, opportunities and knowledge. Today, 50% of the world’s population lives in global areas. By 2050, this percentage will have increased to 70%. While the application of new digital technologies in urban spaces has been celebrated for its ability to increase citizens’ well-being, various experiments around the world have revealed how we forget to examine the impact, on various levels, of this digital development in the cities of the future, including on the psychological, ethical, philosophical, social and political level.

For a Brave New Brussels engages in a social-political discourse that involves citizens and various interest groups on the following question, namely what constitutes a desirable smart city in an era of technological revolution?

AnneMarie Maes wil be showing her installation Umwelt of the Forager, an artistic research on Symbiotic Habitats and Green Corridors in cities.

The show is only open until 26 October, daily from 11am-7pm
More info here

Hantu in Coimbra and Paris 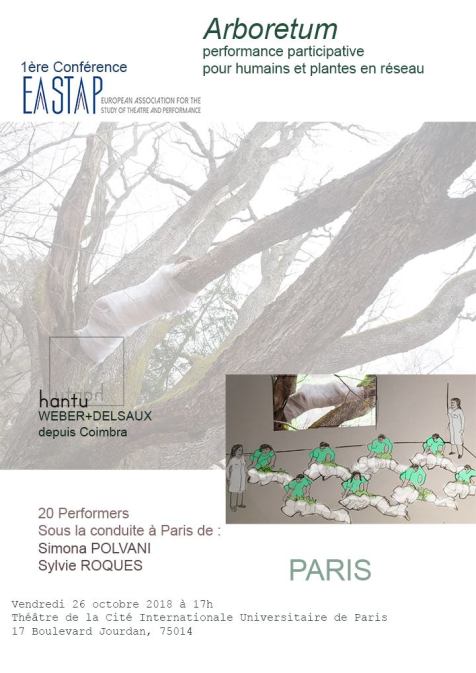 Hantu (Weber+Delsaux) will be performing in Coimbra and Paris this Friday.

In Coimbra, Portugal at 9am they will be performing Elle : Végétale during the international symposium SATHE (Study and Advancement of Teaching in Higher Education).

Later that day they will participate in the performance Arboretum – a participative networked performance for humans and plants, which takes place during the first conference of EASTAP (European Association for the Study of Theatre and Performance).