Bureau Doove is happy to announce it is now working with Neil Wood.

Wood was born in London and has lived and worked in Brussels and Paris since 1995. His work is an intriguing mixture of short stories, poetry, sound performance, film and photography; tied together with essential common elements such as the typeface Helvetica Neue 77 Bold Condensed and narrative themes and ideas about identity, presence, surface, material symbolism, timelines, memory, cause & effect, sound, rhyme.

Wood recently completed a commission for the Paris Metro (RATP) – a 50 metre mural installation named ‘Eh Toi Là, Attrape Ton Étoile’ located at the Charles de Gaulle Étoile hub station. It is made up of networks of printed colourful dots against a black curved background inspired by the nightlife and lights around the Champs-Elysées. Available text (in French) on the project here

In contrast, but in a similar poetic vein, Wood’s KILLER WRAPS® NOTEBOOKS are both useful and poetic objects that are one step on from the earlier KILLER WRAPS prints and volumes or sculptural forms in which new words are created by associating different colours. The notebooks attempt to find a place in between gallery and bookshop in their hybridity and are currently on sale at the Marianne Goodman Gallery Shop, 79 rue du Temple, Paris 3eme. 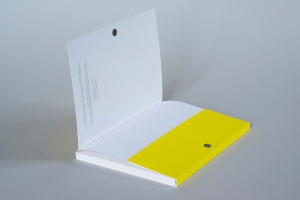