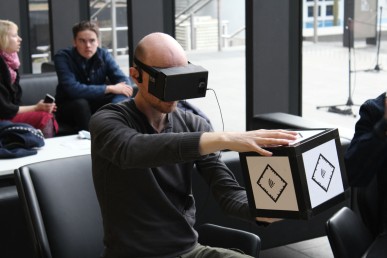 Very excited to announce that BUREAU DOOVE will now also work with Plymouth-based artist Mike BLOW. Blow’s artistic practice spans sound art, interactive art and performance, and is an ongoing exploration of his interests in electronic creativity, the study and modelling of natural processes and the artistic possibilities offered by intermedia spaces.

Blow will present Traak! this upcoming weekend during MEDIACITY 5 Exhibition-Urban Interventions at Plymouth University.
Traak! is the result of the interdisciplinary collaboration comprised of Mike Blow, John Twycross and Eric White called The Avant-Gardes and Speculative Technology (AGAST) and which combines humanities research, technology production and creative practice. AGAST re-creates technologies that were designed by 20th-century avant-garde writers and artists and applies them to new contexts.

Its first project is a re-imagining of futurist musical instruments called ‘noise tuners’, or intonorumori, invented by Luigi Russolo around WWI. AGAST’s is called Traak!, a reference to an onomatopoeia in futurist manifestos about noise, and to the smart phone technology in their instrument.

Traak! is a wearable device that allows users to ‘play’ an animated futurist sculpture and create the ‘future sounds’ of cities. In this interactive installation, participants can use Traak! to explore the possibilities of Augmented Reality (AR) and reconsider their relationship with art, technology, and the environment.

More info on Mike BLOW‘s page and on Mediacity 5.